The Face Of Nijmegen coin

Order in our webshop

The mask on which Andres Hetfeld based his artwork has its origin in an archaeological find of a 2,000-year-old Roman equestrian mask – one of the oldest and most beautiful objects in the history of Nijmegen and the Netherlands. This face helmet has been on display in Museum Het Valkhof for many years. Around 1915 it would have been dredged in the Waal, near the Nijmegen railway bridge. The original mask is covered with brass and bears traces of silvering and gilding.

… To a monumental work of art

Artist Andreas Hetfeld was captivated by the beauty of the equestrian mask that inspired him to create the monumental work of art “The Face of Nijmegen”. After a majestic journey across the Waal, the 6-meter-high mask artwork has been on the city island of Veur Lent since April 2020. Since then, the iconic image has magically attracted visitors and photographers. Photos of the statue have now spread all over the world as a symbol of hope, strength and protection.

The artist has sought collaboration with the craft company De Tinnen Roos to develop and manufacture some beautiful products of the artwork. De Tinnen Roos is located in Millingen and is known far beyond the national borders for its craftsmanship and detailed products. Millingen is also the place where Shipyard Millingen produced “The Face of Nijmegen”.

Planning to create a souvenir?

Do you have a special work of art that you want to capture in a unique way? De Tinnen Roos thinks along with you in the design and manufacture of a souvenir. Suitable as a gift to special people, but also for private sale as a souvenir. Please feel free to contact us for the possibilities and a quotation.

Design on the computer

For the design of this coin, existing 3D drawings were used that formed the basis of the artwork. These drawings were not suitable for the production of the souvenir line. That is why adjustments have been made within De Tinnen Roos, using ZBrush and SolidWorks. Together with detailed photos of the artwork itself, a flatter version of the mask was created. In addition to the mask, recognizable eye-catchers from Nijmegen have been included in the design, such as the Stevenskerk and the Waal Bridge. The reverse of the coin shows the reverse of the artwork with its interior.

The design was sent by the computer to our milling machine. The plastic was removed layer by layer from a piece of plastic. During this process, the details became more and more visible. After everything had been milled out, the plastic coin was cleaned so that there was no leftover sharps and other dirt on it. Ready for the first casting to make masters.

A number of masters were cast in a first mold using the plastic print. Masters are used to make the production mold. All molds are manufactured in-house and adapted per product for the best casting results.

It is cast with a tin-bismuth alloy. This alloy is produced by ourselves in the casting pots. With each pour, the mixture is manually poured into the spincasting machine.

After cutting the coin clean and grinding the edges, the whole is not yet ready. The dull silver color of the material itself is still present. To get the antique look of our end product, the parts have been given an acid bath. The entire surface was carefully made free of grease and dust before the acid was added. The smallest details were brushed with a toothbrush so that no spots were missed. Finally, the brush has been brushed clean to buff away the dark layer and give the miniature artwork its final appearance. A layer of Zapon lacquer ensures that the coin retains its color and that the acid layer cannot give off color. At the same time it gets a small gloss layer.

More images of The Face Of Nijmegen coin 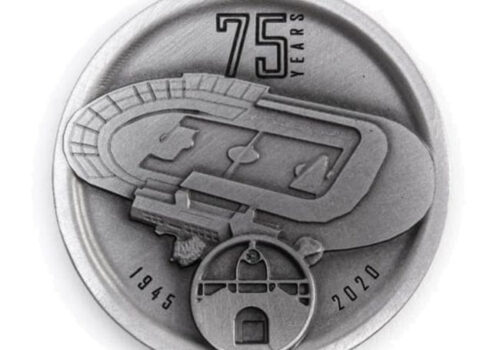 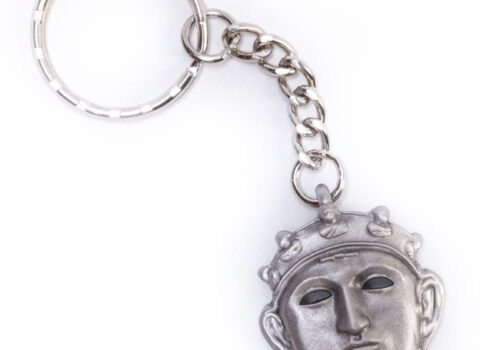 The Face Of Nijmegen keychain 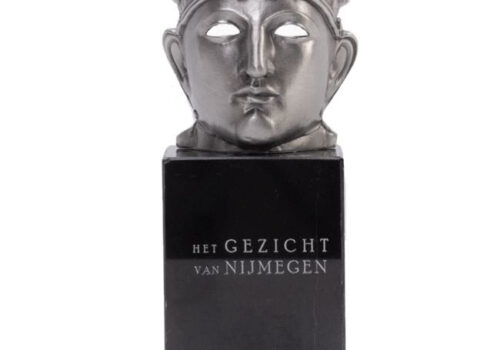 The Face Of Nijmegen miniature 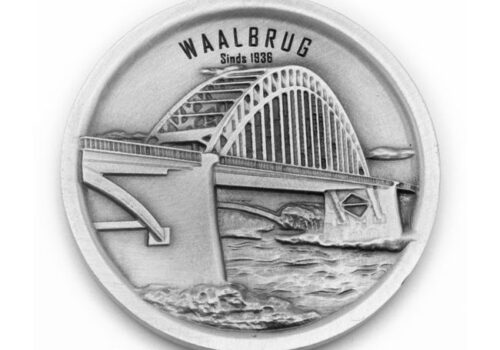